Jesus probably spit up. And other thoughts on babies this Christmas. 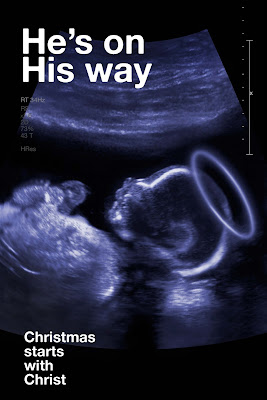 The Bible has several examples of babies that were conceived for a purpose that would shape history. Abraham and Sarah, who were of advanced age; Sarah being barren, conceived Issac. Then Isaac's wife, Rebekah, was barren and was granted the ability to conceive, bore Jacob and Esau. Manoah prayed that his barren wife conceive and she was visited by and angel and bore Samson.  John the Baptist, born to the aged Zachariah and his barren wife Elizabeth. And the most well known conception, the Virgin Mary who bore Jesus. (Both John and Jesus were announced to them by the Archangel Gabriel).  There probably are others, but these are all that come to mind now and are sufficient to bear my point.

All these people were essential in salvation history. All were purposefully conceived and God made sure to point out His role in their conception. All entered the world for a grand purpose.

Truly I tell you, among those born of women there has not risen anyone greater than John the Baptist; yet whoever is least in the kingdom of heaven is greater than he.

Dr.Tim Keller says, In one of the most overlooked passages in the Bible, Jesus called John the Baptist the greatest prophet in history, and then added that every single believer is now greater in position and calling than him. (Matthew 11:9–11) ‘The least in the kingdom of God is greater than he [John the Baptist.]‘ What did Jesus mean? He couldn’t mean that every Christian believer would be more courageous or more godly than John the Baptist. (I know that I’m not!)

At mass yesterday, Fr. Kelley pointed out that the conception of EVERY baby is willed by God.
And how Jesus' own words bear that out.  I can hear the outraged cries now. What about conceptions as a result of rape and incest!!? Well, what about them? Think about this. Is getting pregnant and having a baby a bad thing? Is it, as our president famously stated about his own daughters, a punishment?  Perhaps a woman doesn't feel ready or her conception was a surprise. (Tradition states that Mary was 14).  The thing that stands out most to me is the mindset of all the women given these "special assignments"by God. they were either barren, elderly, or in Mary's case, very young and unmarried. They all saw childbirth as a badge of honor. Mary's response being the crown, the Magnificat:

My soul proclaims the greatness of the Lord, my spirit rejoices in God my Savior; for He has looked with favor on His lowly servant From this day all generations shall call me blessed. The Almighty has done great things for me, and holy is His Name He has mercy on those who fear Him in every generation. He has shown the strength of His arm, He has scattered the proud in their conceit. He has cast down the mighty from their thrones, and has lifted up the lowly. He has filled the hungry with good things, and the rich He has sent away empty. He has come to the help of His servant Israel for He has remembered His promise of mercy, the promise He made to our fathers, to Abraham and his children forever. Amen

Mary lived to please God and her response was full of the grace she received from Him at her conception. All the other women did not have this special grace but were grateful to God for their babies anyway.

So back to the objection. I have a question. Have you ever known a woman that had a baby and it changed her life? I am one, and I know many others. Suddenly, her life had a completely different focus and purpose. Maybe some of her old ways of thinking and doing things faded away in light of this greater thing that happened. Maybe she was able to see beyond herself and her own problems because her baby helped her look to the future. A baby conceived in a negative way can have a positive effect on the mother. If her mindset is one that knows the conceived child's life is willed by God and has a particular purpose in the world, and that she is helping to bring that about. If she can see past the right now and know that a child can help make a mother a better person. That she is, in essence, saving that child, who does not have to grow up with a negative stigma, but seen as a gift that came from a bad act, if that was the case, and who defied that bad act by being something beautiful.

And for mothers -- Mary is often seen with a sword through her heart. We care so much for our children that we often can relate to that. Right now, I think of the poor mothers (and fathers) of the slain children in Connecticut and know that are living that sword most literally. But Mary is, at the very same time, full of grace. We can also experience Extreme Grace because we cooperated with God in bearing and raising our children. With every woman's yes, comes the grace to have and to raise our children. My prayer for the parents of the Sandy Hook tragedy is that they would be flooded with grace.

I never would have believed that I could raise seven. Never. God has given the grace, and still is, to help me, despite my many sins and failings, to do this. He will do it for you. And every mother that says yes to the life He ordained within her.

If you are pregnant, and need any kind of help. there are pregnancy help centers all over the country. If you cannot find one in your local directory, your local Catholic church may be able to direct you.

If you say yes to God regarding the baby you are carrying, even if you give him up for adoption and bless a childless couple, God WILL  show you His grace and mercy and do a wonderful work in your life. If your mind and heart are open to Him. If you are only open to the voices that tell you an abortion is just one choice and will be quick and easy, beware that lie. Beware it. Your life will not be the same, no matter how much you will it.

Here are a few images of the Virgin and Child that I love. 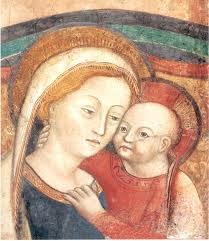 I feature this one, Mother of Good Counsel, on my sidebar.  It is an ancient image, said to have been etched in the wall of a cave somewhere in the 400s, connected with miraculous healings and protection. Now it is in the care of some Augustinian nuns in Italy (I think). I just love the baby Jesus hanging on her neckline. It is just what babies do! And apparently, always have done. 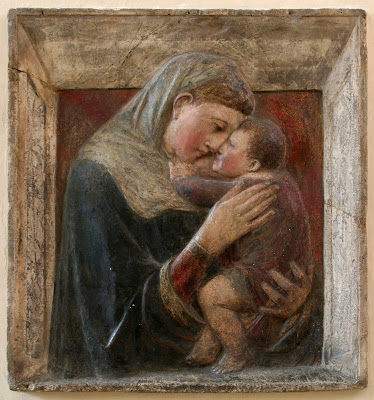 This one is by Donatello. Not the ninja turtle. Again, it shows them in a sweet moment, just like any other mother and baby. I have always believed Jesus was like all babies, needing his mother all hours of the day and night, crying, spitting up on her best clothes, etc.. Not like some tiny adult in a baby costume. (ew). 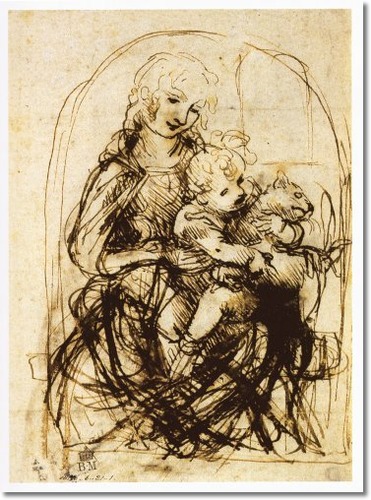 And this sketch of DaVinci. Apparently the Joseph and Mary household had a cat. Love it.

Don't forget to thank Mary this Christmas! She had that special grace, it's true. But Joseph didn't (poor guy! the only sinner in the house!) And Jesus still probably had ear infections and runny noses from time to time. And didn't want his mashed peas, or whatever they mashed back then for their babies. But I still like this image, even though it is less the human and more the divine. 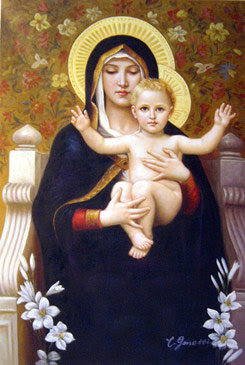 Have a wonderful, blessed, happy and holy Christmas!

Our Lady of Good Counsel 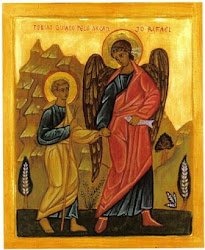 Glorious Archangel Saint Raphael, great prince of the heavenly court, you are illustrious for your gifts of wisdom and grace. You are a guide of those who journey by land or sea or air, consoler of the afflicted, and refuge of sinners. I beg you, assist me in all my needs and in all the sufferings of this life, as once you helped the young Tobias on his travels. Because you are the "medicine of God," I humbly pray you to heal the many infirmities of my soul and the ills that afflict my body. I especially ask of you the favor {mention your petition} and the great grace of purity of prepare me to be the temple of the Holy Spirit. Amen. Saint Raphael of the glorious seven who stand before the throne of Him who lives and reigns, angel of health, the Lord has filled your hand with balm from heaven to soothe or cure our pains. Heal or cure the victim of disease, and guide our steps when doubtful of our ways.

our lady of the angels 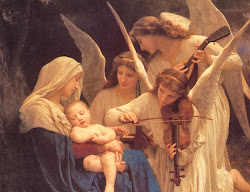 Kelly
I am a blessed wife, mom of seven and Nonnie of two. The story of how we live our faith in a home chock full of complicated history and the challenges of our modern world.

Saint Michael the Archangel,
defend us in battle;
be our protection against the wickedness and snares of the devil.
May God rebuke him, we humbly pray:
and do thou, O Prince of the heavenly host,
by the power of God,
thrust into hell Satan and all the evil spirits
who prowl about the world seeking the ruin of souls.
Amen. 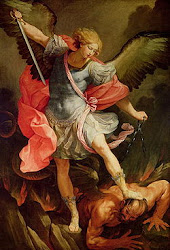 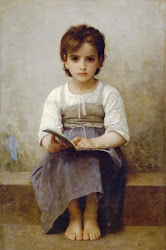